CFTEXTINPUTis the first tag you are going to look at that enables you to extend the basi functionality of HTML forms with special Java applets. The CFTEXTINPUTtag enables a form to include a more flexible single-line textentry field than traditional INPUTand CFINPUTtags

Among the features of this Iava-based field are the capabilities to specify the font of text inside the fields as well as the color and size.

Beyond this though are the validation features of the CFTEXTINPUT tag which will be discussed in the next chapter and text formatting features which we cover here.. 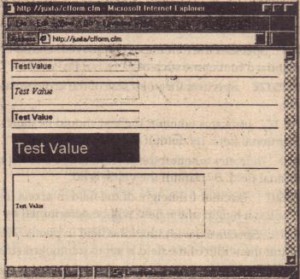 When a form containing fields created with CFTEXTINPUT is submitted, the value of the field is available through a form variable with a name corresponding to the name of the field. For instance, if you add a submit button to your form, you can access the values of the fields in submi t. cfm with Form. Testl, Form. Test2,Form. Test3, Form. Test4, and Form. TestS.

A final issue needs to be addressed: What happens if a browser Without Java support or with Java support disabled loads a page with a form containing a field that was created with the CFTEXTINPUT tag? As mentioned earlier, the field is actually a Java applet

The next java-based form field you will look at is created with the CFSLIDER tag, This tag “builds a slider control that is ideal for selecting a value from a numerical range (such as ages, weights and sizes). Figure 15.21 shows a sample slider control. 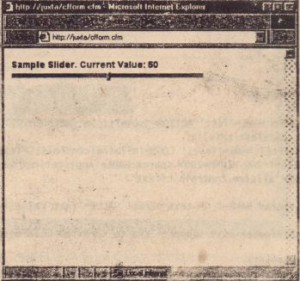 Aside from attributes used for form validation, \ nich we will cover in Ch-: ‘<>~ 16, the CFSLIDER tag uses several attributes to control its oehavior and visual appearance. These attributes are described in the following sections

These two values are specified using the following attributes:

RANGE Specifies the left and right values of the slider range. The numbers should be separated by a comma. For instance, the range 0 to 100 (which is the default range if none is specified) is indicated with RANGEz” 0  100″ .
SCALE Specifies the increment for the control. By default the increment is 1.

You need to consider some practicalities of combining range and increment settings. The basic rule is this: The left and right values of the range preferably should each be a multiple of the increment value. For instance, the range RANGE-’24 , 1<50’with an increment SCALE-12will work properly for the left value of the range: 24 is a multiple of 12. This displays as shown in the following graphic

In addition to specifying the range and increment of a control you can also specify a default initial value using the VALUE attribute. Generally you will want to make this value a multiple of the increment within the specified range. If the value specified doesn’t meet these criteria then the slider will display the default value (even if it is out of range). But after the slider is moved then it is not possible to return it to the specified value.

By way of example, the following attributes

work well and initially appear with the value” shown in the following graphic.