Home » Including Out Side Code » Understanding Variable Scope Issues

In this chapter especially in the discussion of the CFMODULE tag you have seen examples of the implications of variable scope even if we haven’t explicitly referred to them.

The concept of scope is fairly simple Scope simply refers to the context in which a variable exists or doesn’t. In its most simple state, a variable’s scope starts when it is first declared (for instance, when a vahre is assigned to it using CFSET) in a template and lasts
to the end of the template.

However if the order of these lines IS reversed then CFOUTPUT is trying to access the variable SAMPLE outside the scope of the variable (that is before it has been created):

In this case an error similar to the one in Figure 8.3 will be produced. 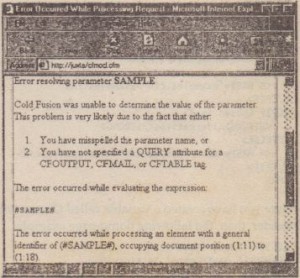 This is why for instance when CFINCLUDEwas used the template was able to directly reference the variable Chosen which was used to generate the header and menu.

This is an important distinction because it allows for variables to exist with the same name in both the calling template and custom tag independently of each other. They can contain different values and do not interfere with each other.

Recall our custom tag for.outputting a menu and header:

Here you have created a variable called Chosen within the context of the custom tag. Consider then the following home-page example:

In the home page the variable Chosen is created and assigned the value Test. Next the custom tag is called and passed the Section attribute. Within the custom tag the value of the Section attribute is assigned to a variable called Chosen. This variable has a different scope than the. one set in the calling template however and when the custsm tag finishes executing the’ variable Chosen.in the calling template retains the value Test.

Where Do We Go from Here

In this chapter you have learned about two useful tags for combining more than one template: CFINCLUDEfor including one template in another and CFMODULfoEr using another template as a Custom tag.

In the next chapter, you will move on to an extremely important aspect of ColdFusion: creating databases and tables.

Databases are what give ColdFusion its power. With databases, ColdFusion applications can manipulate and process large amounts of information quickly and easily for the user and at the request of users. This allows the creation of sophisticated interactive dynamic Web sites.

Posted on November 14, 2015 in Including Out Side Code