A Cross Join usually occurs when a programmer has forgotten to include a join in their SQL statement. The total results from a Cross Join are calculated by multiplying the number of rows in the first table by the number of rows in the second table. This is also called a Cartesian product. Even on tables with minimal records, the result set can become quite large. On large tables it can overload your server and cause major. performance problems at the very least

In the following query you will notice that although the book’s title “Mastering Cold-Fusion 4.0” has no author associated with it. the results have matched up every speaker as an author of this book (see Figure 11.6): The following is obviously not correct: 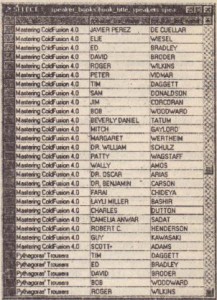 Now what if you want to join more than two tables? You can! It is much easier to create multiple table joins using Studio’s Query Builder than to attempt it yourself. Nevertheless for the braveof heart multiple joins will be briefly demonstrated.

If you use the SQL-92 ANSI standard to join multiple tables you will need to nest your join statements in the FROM clause. First look at the following query

If you look closely at the FROM clause you will see that three tables are involved. in the join.

The results of this join can be seen in Figure 11.7 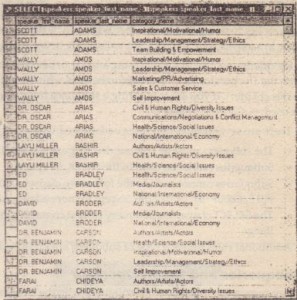 Finally, if you use PL/SQL, your query could be like this:

Subqueries can be nested many levels deep. After about the second nesting subqueries become difficult to interpret and decipher. Usually at that point, it is better to accomplish your task with a join. Sub queries and joins are often two different approaches to doing the same thing. What can he done in a sub query can usually be done in a join as well. In fact joins are usually better when it comes to performance.

Subqueries are useful for returning a value to be compared, a list of values to be used with the IN operator, or a record set to be used with the EXISTS operator (discussed later in this chapter). If yop are comparing a subquery to a value, the following operators can be used: =, <, >, <=, >=, and <>.

There are several rules that must be followed when using subqueries

• The subquery must be surrounded by parentheses O.
• Subqueries cannot be used in the ORDER BYclause.
•Subqueries cannot include the following clauses: ORDER BYSELECT INTO COMPUTE GROUP BY,or HAVING (except in more advanced forms of SQL).
• The SELECT clause of a subquery cannot contain fields with the data type of text or image.

Subqueries and the IN Operator

When comparing the results of a subquery with the IN operator the subquery can return many records but must return only one field that matches the data type of the value being compared. This subquery must be used in the WHERE clause of the parent query

The following query demonstrates the use of a subquery in the WHERE clause using the IN operator. The results are shown in Figure 11.8. The results will show all speaker names that have books selling at a price over $5.00:

Subqueries and the = Operator

The following query demonstrates the use of a subquery in the WHERE clause using the = operator. The results will show all the books in the database written by Guy Kawasaki. The subquery is used to gEc*thte speake r_; d of Guy.

The results are shown in Figure 11.9

Subqueries and the EXISTS Operator