When working with more than one arithmetic operator, there is precedence when evaluating their calculations. They are resolved in this order: multiplication, division, addition, and subtraction. Of course, you can use parentheses to override this order.

The Multiply (*) operator is used to multiply two values. This can be done in both the SELECT and the WHERE clauses. This operator can only be used with numerical values. This symbol is also used as a wildcard for selecting all fields from a table when used w.ith the SEL:ECT clause. I isting 10.18 and Figure 10.18 show.the use of the multiply operator in both the SELECT and the WHERE clauses. In the SELECT clause it is used to calculate a new book price that includes a 20% discount off the current price. In the WHERE clause it is used to ensure that only books that have a final price of over $10, after the discount has been applied, will be included. 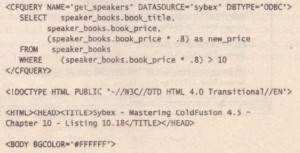 The Divide (/) operator is used to divide one value into another. This can be done in both the SELECT and the WHERE clauses. This operator can only be used with numerical values. If you want to cut your book prices in half as long as the final price is over $5.00, you could use the following query:

The Add (+) operator has two main uses. The first is to add numeric values together. This can be done in both the SELECT clause and the WHERE clause. In the SELECT clause, you would most likely use it to add a set numeric value to a column. The following query would add $5.00 to every book price listed in the speaker_books table if the field already has a value:

The Subtract (-) operator can be used to subtract one value from another. This can be done in both the SELECT and the WHERE clauses. This operator can only be used with numerical values. In the following example, $1 is subtracted from all book prices in the speaker_books table where the book_pri ce field is not NULL:

Logical operators are used to bind together multiple conditions in the WHERE clause. They return only the Boolean values of TRUE and FALSE. There are three logical operators, and they are described

Of course, you can get the same results by just switching the greater than sign to a less than sign. NOT can also be used right alongside several of the following operators:

If there is more than one condition in your WHERE clause and both conditions must be fulfilled, then you would use the AND operator to join them together. A record is returned only if that record said all of the conditions separated by the AND operator. The following query would return ‘allbooks with greater than,$5 and less than $10:

Posted on November 14, 2015 in Using CFQuery and SQL to Interact with the Database

Evaluation Precedence
Getting Data From a Database